If you have followed this blog over the past fifteen months or so, then you will certainly recall references here and there to the Trading Card Guild, a crafty transposition within the “TCG” acronym of Topps Chewing Gum.

The Trading Card Guild looks like it was started as an effort by Topps to sell cards in higher-end establishments, at least when compared to the corner candy store or the local 5 & 10. Primordial efforts in the Fifties yielded a ten cent price point for packs and featured fancier cellophane wrappers. I have to think these marketing efforts, which stressed the educational aspect of the hobby, were aimed at parents and possibly teachers. After all, what kid would give a hoot about learning something valuable from his or her cards, especially when there was no gum to be had in the packs? There was likely some overlap between what types of establishments were offered Guild packaging by their jobbers or wholesalers vs. the "regular"penny or (more likely) nickel packs and I would think only select cities and suburbs were targeted.

The earliest thrust of the Guild seems to be centered upon “twin-windowed”, horizontally elongated backs that held sets issued in panels. It is possible the move was in response to a Bowman campaign that sold cards in ten cent packs and used a newsletter to entice parents to buy more educational product. The earliest sets I have seen reference to that were sold this way are the 1951 Red & Blue Backs but I would not be shocked if they are a year older. 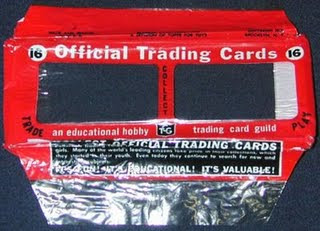 Fighting Marines is another set known to have been branded as such. In 1953 some of the first series baseball cards were issued in ten cent, twelve card Trading Card Guild packs. Legendary Auctions has some in the hopper right now: 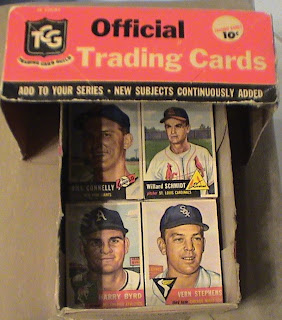 I wonder, without cause I might add, if these packs are the source of the hobby lore wherein leftover high number 1952 baseball cards were mixed in with first series 53’s?

You can't tell from the cellophane that they are Topps Guild wraps but the box gives it away: 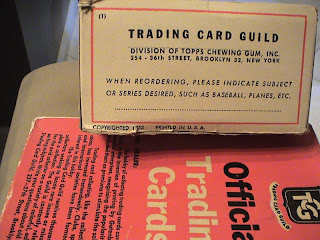 I wonder if any set was available on an a la carte basis?

Here's a better look at some key packaging: 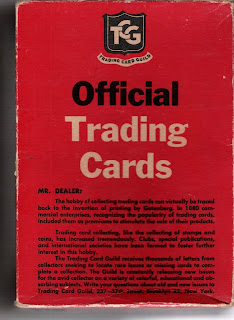 A couple of years later, Topps 1955 All-American football cards were sold in packs similar to those containing the '53 baseball cards but with almost twenty cards within. Some of these were found years later in an old candy store so not all large cello packs went to Grant’s or A&S! However, if you look at this CU thread, the All American packs were in a regular Topps box. Damned strange if you ask me.

The 1956 Elvis Presley set was also issued in Guild trappings: 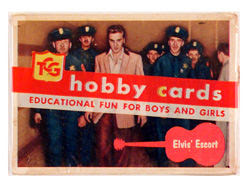 There is at least one album associated with the Trading Card Guild, from the 1956 Jets issue and I ponder if that was a common denominator since, as you can see from this box that held the 1953 baseball packs and the Elvis reverse above, that you could write to the Guild and obtain all sorts of things and albums would certainly help move some packs of cards. 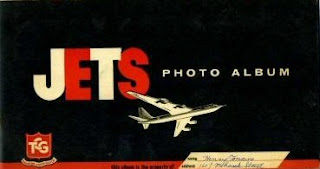 Various issues appeared within these red and black wrappers and the moniker also was used for 500 count vending boxes, as this 1964 Beatles artifact clearly reveals.

I suspect the Trading Card Guild efforts died out when Topps moved their production facilities to Duryea in 1965 but am not 100% certain. It would be great to work up a full list of Trading Card Guild packaging and sets as there is scant information on the web or in print concerning this subject. I’ll post updates here as things develop.