Bazooka Joe And His (Older) Pals

While not often thought of as Topps cards, Bazooka issued an almost uninterrupted run of baseball sets from 1959-71, the vast majority of which were issued on the backs of boxes of their namesake bubble gum in panels of three.

I found a really nice scan of a proof sheet from 1963 in the depths of my hard drive this morning: 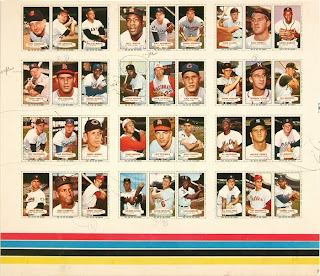 The Bazooka cards often featured better photography than their Topps brethren. Some years tend to look alike though but dem's da breaks!

You can see how the panels were stripped onto the boxes, from a scan is lifted from Clean Sweep Auctions:

If you click the picture, it will expand and you can see it held five All Time Great cards within: 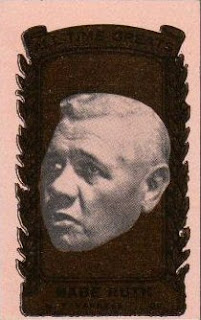 That Babe is the more common gold version of the cards. There is also one referred to as silver: 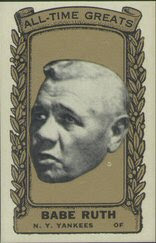 Silver cards are harder to find but don't seem to tend toward the pink toning seen on the borders of the golds.

Locked in a battle with Fleer over the rights to various current ball players in 1963, Topps hit the boys from Philly right in the labonza with the insert set as Fleer had issued cards of old timers over the previous three years. There are 41 All Time Greats in the insert set.

There are 36 current players in the '63 Bazooka set, a total that was fairly consistent over the years the cards were printed. Panels are very collectible today and display nicely but there is far less interest in these cards than in the mainstream sets issued by Topps.
Posted by toppcat at 3:04 PM