(WARNING-Circumstances may have changed regarding this set. See here for more details and also Bob Lemke's blog. -TC 12/21/09)

Every once in a while, something pops up in the Topps universe that wasn't expected. I've not dwelled too much on the end of the 1970's here as there is not a whole lot to discuss outside the mainstream from 1975 until the end of the decade in 1980 but there were glimpses of innovation here and there.

Oh, on the baseball front there are the '76 Cloth Sticker Prototypes and the skip-year supplemental sets in '75 (Mini's), '77 (Cloth Stickers) and '79 (Comics) but after the Oil Embargo started in the fall of 1973 there just wasn't much being spent on new product research at Topps (or anywhere else) and the quirkiness was essentially wrung out of the production cycle as the economies of scale changed almost overnight. All the crazy test issues and metamorphic inserts, all the punch out cards and scratchoffs, all the flocked stickers and intricately plotted mixed media sets were just discontinued, seemingly overnight.

Things started to improve in 1980 and the super tough Baseball Coins from that year have already been discussed here another, even rarer set, was produced that year namely Baseball Superstar Stickers. I had only seen a reference and low-res b&w picture in the Standard Catalog but a couple of days ago a Net 54 posting (it's #65 and also includes the known checklist for the set) gave us a full glimpse of one: 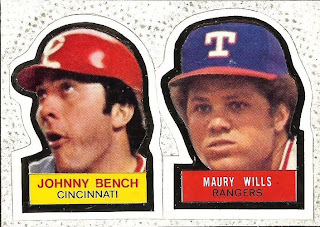 That is NOT the best shot I have ever seen of Johnny Bench by the way. The stickers are purported to be one-of-ones, which means these were probably just produced in house as part of a design process.

So why the sudden rebirth of creativity in 1980 at Topps? Well, they knew their exclusive deal to sell baseball cards was about to expire (see paragraph 8) and there would be competition in 1981 from Fleer (and as it turned out, Donruss). Nothing like a little competitive pressure to get the creative juices flowing! By the by, if you read above the Fleer decison in the link, you come acress the "right to publicity" case stemming from Bowman's (Haelan Laboratories) earlier suit against Topps and which is the foundation for the right of people to license or control their own likeness-It was a landmark decision.

The 1980's would bring a rebirth of the supplemental and test sets from Duryea and a steady stream became a torrent by the end of the MTV decade. I've really had a cutoff of 1980 in my archiving endeavors but I may extend that by another decade. We'll see.

That particular head shot of Bench comes from the Sports Illustrated cover during the 1976 World Series.

I like how Bump Wills is referred to as Maury (his father) as well.

I had never known of these. Is there a checklist known to exist.

Are we sure these are Topps made?
Using the pictures from SI makes me very skeptical. By this time in the late 70s Topps would have had plenty of pics to use instead of using cropped SI pics. I think these are possibly counterfeit/fantasy items.