Well non-sports fans, we are back in action on the Winners front!

A nice set of box scans has shown up in the current Legendary auction and reveals new details about the contest: 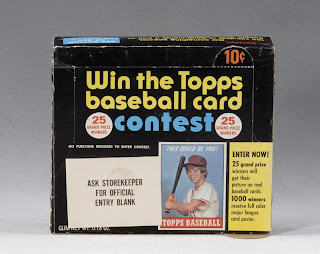 As previously speculated upon, there was indeed an entry blank provided by your friendly neighborhood shopkeeper. Now, given that we have two sisters who won this contest, I have to wonder if perhaps only a couple of entries from each test retail market made it in to Topps HQ in Duryea . I have to further wonder if this whole scheme was merely an early effort to track buying demographics on the part of Topps. Oh yes, we also have a lead on a consolation prize poster premium featuring the 1971 baseball cards, with a maximum print run of 1000. I have never even seen one! And despite the promise of 25 grand prize winners, we are still stuck at fifteen known subjects thirty eight years later.

There is some nice graphics work on the box and the pop up tab of a Pete Rose coin is classic. 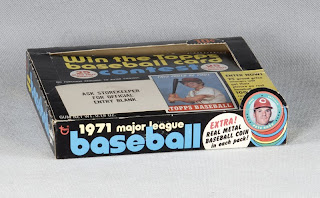 As previously detailed here the Winners cards were actually distributed in limited quantity inside 1972 baseball packs that were given to the contest winners along with two vending boxes worth of their individual cards. This means they were the last Topps baseball inserts until the UV era.
Posted by toppcat at 4:24 PM