Programs, Get Your Programs Here!

Meanwhile, back on the rubber chicken circuit...a discussion of some early Topps Rookie All Star Banquet Programs. Few of these have survived the years and I cannot even lay claim to owning more than one (1962) or even having a full run of scans covering the years the program was a full-blown affair (1959-66). So I'll show what I have and hope our faithful readership can fill in the blanks.

Topps first made a big deal out of the annual crop of Major League rookies in 1959, with a colorful 31 card subset of The Sporting News Rookie Stars of 1959 which was likely the venerable publication's marketing response to the 1958 Sport Magazine All Star cards from the year prior: 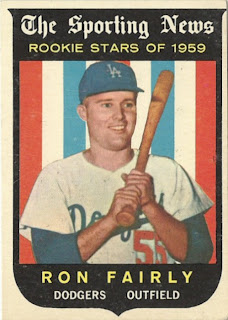 The back of the card shows the writeup from TSN: 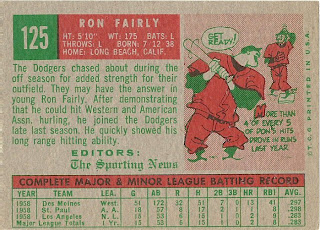 I have to think the idea of honoring top rookies evolved into the first Rookie Awards Banquet, held in New York City in 1959: 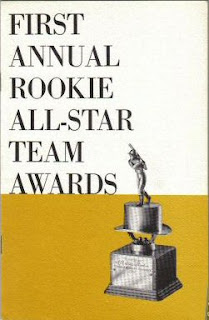 I'd say it's pretty optimistic when the event goes annual, even the first time out! That was from an Ebay auction a while back, one of the few I've seen over the years. 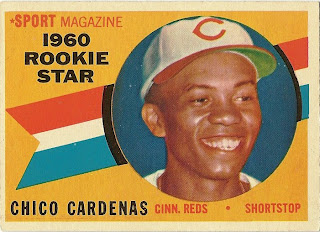 There was a new kid in town though, the Topps Rookie All Star trophy: 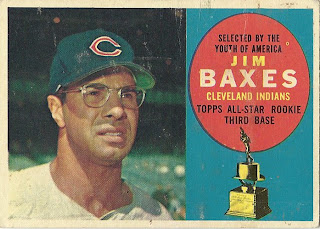 Jim Baxes was indeed one of the first ten winners of the annual award, as seen in the prior thread on 1964 Rookie Banquet Cards.

There were also paper inserts issued in 1959 and 1960 packs that allowed you to "Elect Your Favorite Rookie" and I am working on getting some scans of the 1959 version (they are quite rare) but am not sure how long they fed into the annual awards, which seem like they were a much more officious affair. Here is a scan of the 1960 insert from a 1988 issue of Sport Collectors Digest: 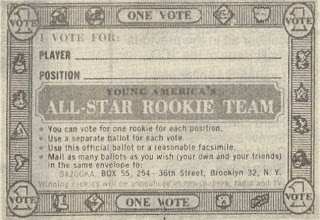 The All Star Rookie Trophy icon was a staple of 1960's Topps cards but was not squared away in appearance until 1961: 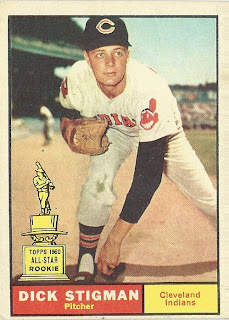 I do not have any good scans of the '60 or '63 programs and the '62 was previously shown but here are a couple interior shots from that year: 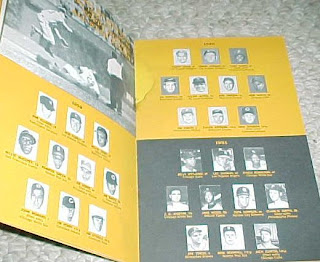 You can see the floating heads that were later co-opted for the '64 Banquet cards. 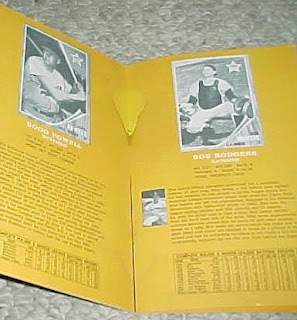 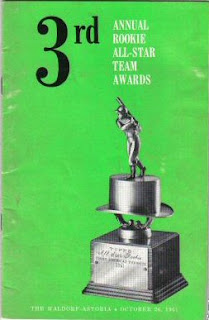 I need color scans from 1965-66 (and maybe '64--there are mixed reports if the card set issued that year negated the use of a bound program) and will post 'em if I get 'em. If not, I'll use some old SCD pictures. Topps switched to a different format for the program in 1967 (I think it went to four larger pages from the previous digest sized versions) but the banquet was still going strong in the mid 80's.
Posted by toppcat at 7:55 AM

The Louis Tiant page is numbered 35in the program.

Let me know if you need any add'l information.

I have the 1959 insert if you would like a picture. Any idea what it's worth. The best player pictured is Willie McCovey.